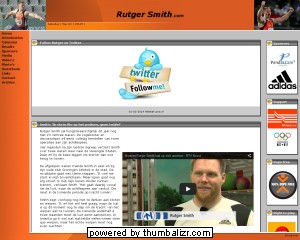 Rutger Smith (born July 9, 1981 in Groningen) is a Dutch track and field athlete competing in the shot put and discus throw. He was the first athlete to win medals at the World Championships in both events. He represented the Netherlands at the Summer Olympics in 2004, 2008 and 2012. His personal best of 21.62 m for the shot put is the Dutch national record.

A series of back problems affected his throwing after he competed at the 2008 Beijing Olympics and he did not return to competition until April 2011.

Since then he has competed at the 2012 Summer Olympics, and won a silver medal at the shot put in the 2012 European Championships.[ He also finished fourth in the men's discus at the same championships. This result was later upgraded to bronze after the disqualification of Zoltán Kővágó.