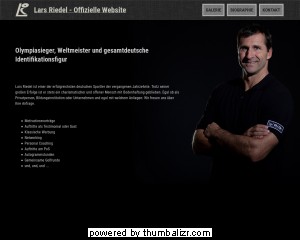 Riedel began his discus career in the former German Democratic Republic. He grew up in Thurm which is next to Zwickau. In 1983, he went to join SC Karl-Marx-Stadt. His first important competitions were the IAAF World Junior Championship in 1986 and the European Championship in 1990. When the GDR went down Riedel stopped training regularly. Soon after Riedel met his coach Karlheinz Steinmetz from USC Mainz he began training once again his sport career. In the 1990s, he became a dominating figure on the German discus scene. With his good physical constitution (1.99 m, 115 kg) he took part in the Olympic Games of Atlanta. There he won his only Olympic title. Furthermore he won the IAAF World Championship five times.

He is separated from his wife Kerstin. They have a son, Robert.