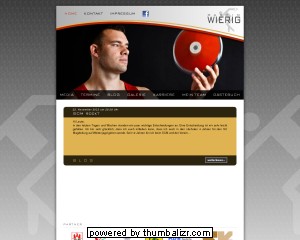 Wierig grew up in Seehausen and visited from the seventh grade the sports high school in Magdeburg. Having initially concentrated on the hurdles, his coach Armin Lemme took him from 2000 up to the throwing area. Although he scored passable results in the shot put, turned out over time the discus throw as his strongest discipline.

At the European Championships 2010 in Barcelona was Wierig seventh at the 2011 World Championships in Daegu as he missed 19 of the qualification place in the final.

2012 won the Wierig Winterthrow European Cup in cash. However, he missed at the European Athletics Championships in Helsinki a place in the finals. Shortly before the Olympic Games in London, he increased his personal best to 68.33 m and finished in fourth place in the meantime the world annual leaderboard. [3] In the Championships even he was with 65,85 m sixth.

At the World Championships 2013 in Moscow Wierig was having a width of 65.02 m fourth.