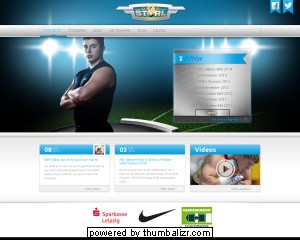 David Storl (born 27 July 1990) is a German track and field athlete who specialises in the shot put. He was successful on the youth and junior athletics circuit, winning gold medals at the World Youth Championships and World Junior Championships. Storl won his first senior medal, a silver, at the 2011 European Athletics Indoor Championships.

He won the gold medal at the shot put competition at the 2011 World Championships in Athletics, and the Silver Medal at the 2012 Summer Olympics.

Storl is one of only nine athletes (along with Valerie Adams, Usain Bolt, Veronica Campbell-Brown, Jacques Freitag, Yelena Isinbayeva, Kirani James, Jana Pittman, and Dani Samuels) to win world championships at the youth, junior, and senior level of an athletic event.