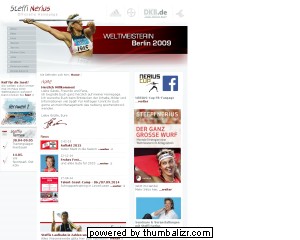 Steffi Nerius (born 1 July 1972 in Bergen auf Rügen, Mecklenburg-Vorpommern) is a German athlete competing in the javelin throw. She won silver at the 2004 Summer Olympics in Athens and is the 2009 World Champion; she is also a three-time bronze medalist at that level.

Initially playing volleyball in school, she was too short for a career in this sport and switched to athletics instead. She was taught javelin throw by her mother, a former javelin thrower. Her first international success was a third place at the 1991 Junior's European Championships. Her first major gold medal came at the 2006 European Athletics Championships in Gothenburg. From 2003 to 2006 she won four consecutive national championships.

Her personal best throw is 68.34 metres, achieved on 31 August 2008 in Elstal. This ranks her second among German javelin throwers, behind Christina Obergföll. The throw also marked a world's best for javelin throwers elder than 35.