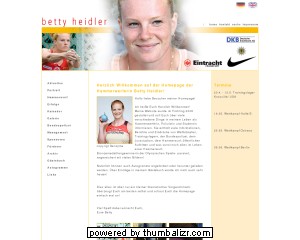 Betty Heidler (born 14 October 1983 in East Berlin) is a German hammer thrower, and the former world record holder. She now lives in Frankfurt and is a member of the Eintracht Frankfurt athletics team. She works for the German Federal Police where she is member of the sports support group and started studying Bachelor of Laws at the Fernuniversität Hagen in 2007.

She put in a dominant performance at the 2010 European Cup Winter Throwing with a winning mark of 72.48 m, beating her nearest rival by more than three metres.

Heidler won the inaugural IAAF Hammer Throw Challenge in 2010, finishing at the top of the rankings ahead of Anita Wlodarczyk.[3] She won the gold medal at the 2010 European Athletics Championships then went on to take the silver medal at the 2011 World Championships in Athletics. In May 2011, in Halle, she achieved a new world record in hammer throw, with a result of 79.42 m.[4] She began the 2012 season with a series of wins, performing at the Colorful Daegu Meeting, Golden Spike Ostrava and Prefontaine Classic.

In the 2012 London Olympics Heidler won the bronze medal. The game was not without contention as the referees first failed to correctly measure Heidler's bronze winning throw.