) started his season in Kärdla, at the Taavi Peetre´s Memorial. He threw 60.14m which was good for the second place.

The winner was Martin Kupper (EST

Taavi Peetre (5 July 1983 11 September 2010)was an Estonian shot putter and discus thrower. He represented his country at two Olympic Games (in 2004 and 2008) and also took part in the World Championships in Athletics on two occasions. His personal best shot put mark of 20.33  m is the second best by an Estonian thrower after Heino Sild. His personal best in discus throw was 60.84  m, achieved in April 2010 in Denton, Texas, USA.[2] He died in 2010 after a boat accident. 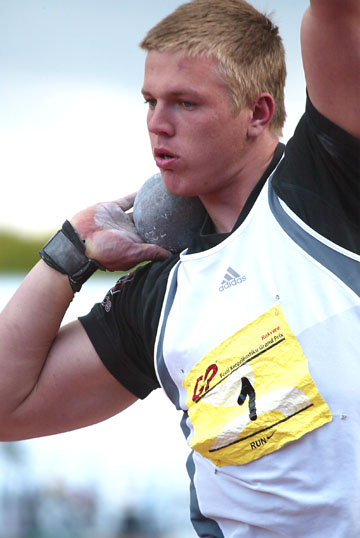 Born in Käina Parish, his first major international competition was the 1999 World Youth Championships in Athletics, where he was tenth in the discus throw qualifiers of the competition's inaugural edition. Peetre finished ninth in the shot put final at the 2002 World Junior Championships, having already thrown a national junior record of 17.71  m earlier that year, and also competed in the qualifiers of the discus contest.He improved his best shot put mark to 19.02  m the following year and made his first Olympic appearance at the 2004 Olympic Games.

He improved his indoor shot put best in February 2006, throwing 19.81  m, and was eleventh at the European Cup Winter Throwing. He retained his runner-up place in the A League section of the 2006 European Cup, but managed only eleventh in the qualifiers of his first continental outdoor championships, the 2006 European Athletics Championships. A low-key 2007 was highlighted by a win at the national championships and eighteenth in the qualifiers at the 2007 European Athletics Indoor Championships.

He returned to top form in 2008, throwing over sixty metres in the discus for the first time and putting a season's best of 20.22  m in the shot just prior to the 2008 Beijing Olympics. At his second Olympic shot put competition he had a best mark of 19.57  m but failed to reach the final round. In 2009 he regained the national shot put title and gave his best performance at a global event at the 2009 World Championships in Athletics: his mark of 19.91  m was the fifth best of his qualification group, but this was not enough to progress to the final.He achieved a personal best in the shot put of 20.33  m in July 2010 in Viljandi, Estonia. His last major international championships was the 2010 European Athletics Championships, where he threw 19.42  m for seventh place in the qualifying round.

On 11 September 2010, Peetre drowned in Lake Tamula during a fishing trip with friends.