To choose the correct discus for your athletes, it’s important to understand the physical properties that make objects fly.

It’s time to figure out what equipment to order for the upcoming track season. You know you need a new discus, so you sit down at your desk and pull out your equipment catalog to the discus page and wow! Different colors, different materials—but what the heck does rim weight mean?

Take a deep breath, relax, and read this article. It will help you choose the correct discus for your athletes. We will focus on the two most important factors in choosing a discus: rim weight and material.

RIM WEIGHT
To understand why different rim-weighted discii are made, you must first understand the physics of the discus. The discus is an aerodynamic implement that must be rotated around its axis. We will focus on moment of inertia, aerodynamic lift, air resistance (drag), and gravity.

For example, consider two discii: the 2 kilogram OTE VHM and the 2 kilogram Gill Blue. The OTE has a higher rim weight (89 percent) than the Gill Blue (75 percent). Assuming that there is a uniform thickness and radius to both, more effort is required to accelerate the OTE (change its angular velocity) because its mass is distributed farther from its axis of rotation. For any given angular velocity, mass that is farther from that axis must move more quickly than mass that is closer. In this case, the OTE VHM has a larger moment of inertia than the Gill Blue. Therefore, it is easier to spin the Gill Blue than it is to spin the OTE.

A lot of you are asking, “If we can spin a lower rim-weighted discus faster with the same amount of force, why don’t we just throw a low moment discus? Won’t it fly farther?” To answer that question, we have to look at forces we can’t see with the naked eye: air resistance (drag), aerodynamic lift, and gravity.

Air resistance (drag): Drag slows down both the horizontal and angular velocity of the discus in flight. Lift-induced drag occurs whenever a discus generates lift. With other parameters remaining the same, as the angle of attack increases, induced drag increases.

Gravity: Gravity is pulling the discus to the ground at a rate of 9.8 meters per second squared. A higher rim-weighted discus has a higher moment of inertia, making it more difficult to begin rotating it around its axis. Once in flight, the rotation of the discus, or angular velocity, will keep a discus flying flat and stable.

Because it takes less force (air resistance or drag) to slow down its angular velocity, a low rim-weighted discus will lose its stability faster than a high-weighted discus. When the discus begins to lose its rotation due to air resistance, it will begin to lose stability and tilt one edge toward the ground. This tilting action makes the discus lose its vertical aerodynamic lift and descend quickly to the ground.

DIFFERENT MATERIALS
According to NCAA rules, the discus shall be composed of a smooth metal rim permanently attached to a wooden or synthetic body. High school rules also allow a rubber discus to be used in competitions.

Rubber Discus: The lowest rim-weighted discus is made from rubber. It is a great discus for beginning throwers because it is the most durable and can withstand years of use. The drawback is that a rubber discus will not perform well when thrown far. Due to its low rim weight, it is very unstable in flight. This discus will turn to its side, lose lift, and fall to the ground sooner than a metal-rimmed discus.

Metal-Rimmed Discus: The metal rim can be made out of either steel or bronze alloy. The steel rim is very durable, and steel is the most popular metal used in making a discus. It holds up to cage hits or poor landing surfaces very well.

A bronze alloy is often used in the higher-priced discii. Bronze is a very dense metal, so you can get a higher rim-weight discus by using a bronze rim. Bronze is also a soft metal that can be damaged easily with cage hits or poor landing areas, which is its main drawback.

The side plates can be made from ABS plastic, wood, or aluminum. Each of these materials has a different feel in the throwers’ hand. The most durable of the three is ABS plastic. The plates come in many different colors and can be used to make a discus from 70 percent rim weight up to 90 percent.

One of Gill Athletics’s most popular discii, the Hollowood Star, has side plates made from straight-grained hard rock maple wood. The side plates and rim are threaded together and then lathed by hand to create the discus, which is then triple coated with sealer and gloss varnish to keep out moisture. It is a very popular discus, but athletes must understand that it is still possible to damage the wood if it hits the cage or a hard landing surface.

The third material is aluminum. Many world-class athletes still prefer discii that are made entirely from metal. They are assembled one at a time to insure a great fit between the rim and side plate. Aluminum side plates may dent if they hit a hard surface, so they should only be thrown by experienced throwers. 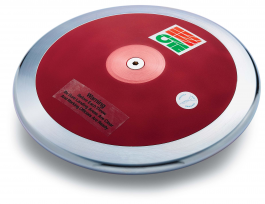 The steel rim is very durable, and steel is the most popular metal used in making a discus.[/caption]

When the time comes, use this information to make smart purchasing decisions that will help your athletes get more distance on each throw. Always choose a discus based on a thrower’s athletic ability. Having a wide variety of rim-weighted discii will help athletes find one that is best suited for them.