Zylstra: I've read German Lars Riedel and Hungarian Attila Horváth were also jumpers before they became world class throwers. How did that work for you?
Dadz: In my early teens I did a lot of high jumping, clearing 1,75 (5' 8¾") as a 13-year old and 1,85m (6' 0¾") at 14. On the track I was a 190 lb. sprinter, running my 100m and 200m personal bests as a 16-year old (PB 11.10 and 22.21 in 1999) along with the very popular relays, including a leg on a record breaking medley relay.
After that season I gained 25 lbs. and could not shed the weight when fall training began. So my friend, Maurice Smith (World Championship decathlon silver medalist),  forced me into throwing. I was going to quit track & field all together because I thought it would be hard for a me, as a well known sprinter, to be throwing the discus and shot put the next season. I did not know what people would say and I was young and that sometimes matters to young people.

Zylstra: Maurice Smith got after you to make the switch?
Dadz: Yes! I thank God Maurice pressured me to become thrower, because I only then would I be the great Jason "Dadz" Morgan for Jamaican throwers [laughter]. I love my destiny. I started training for the throws in January 2000. I went to a few track meets and realize that girls liked big strong guys [laughter]. I surprised myself with bronze medal at the Jamaican Boys and Girls Championships that same year. I threw around 49m with the 1,6k but didn't make it out the shot put preliminaries with my 11.22m.

Zylstra: What do you keep in your throwing bag?
Dadz: I usually have two disc, throwing shoes, chalk and tape, a towel, my iPod and Beats headphones.

Zylstra: When did you start seeing results from your early training?
Dadz: My 2nd season throwing I trained hard. My high school coach Noel White helped me to develop into one of Jamaica's best high school throwers. At the 2001 Boys and Girls Championships in 2001 I won both shot and discus–17,99m (59' 0¼") and 59,61m (195' 7"). It still amazes me today that coach and I were able to improve so much in one year.

Zylstra: Can you tell me about the 2008 Olympic Games situation?
Dadz: My travel documents didn't come back in time for me to travel for the 2008 Games in China; it's all good, that's okay. I was determine to do two more Olympics after Beijing and then retire from the sport. So after Rio 2016 that's it for me.

Zylstra: ... and London Games?
Dadz: My worst competition ever; and yet the best experience ever. 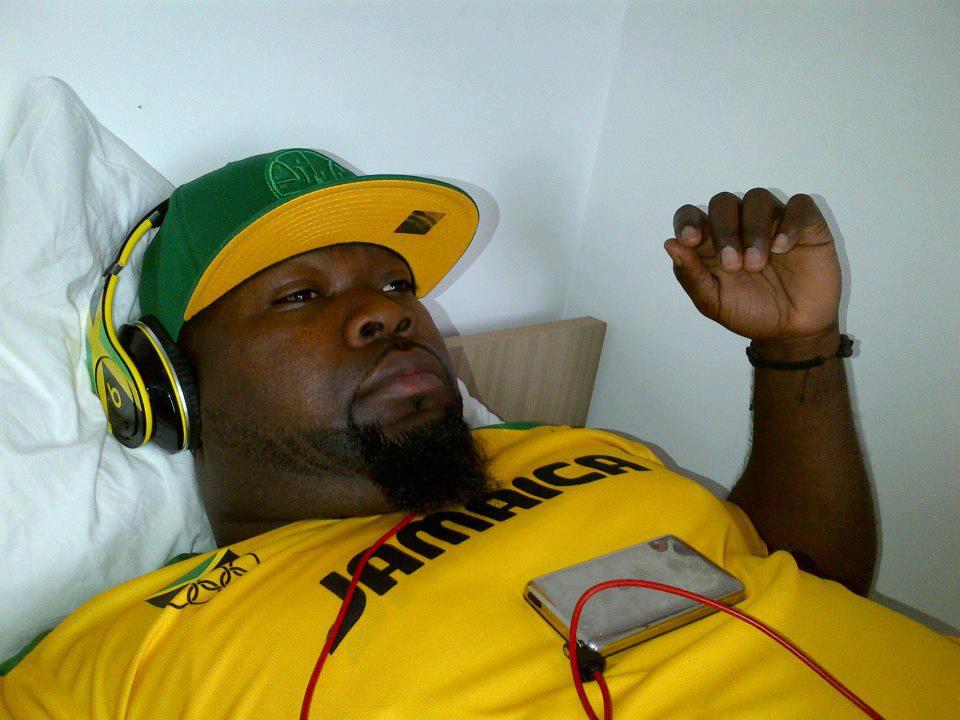 Taking it easy after London Games.[/caption]

Zylstra: When did you begin growing the monster beard?
Dadz: I started in 2012, four months before the Olympic Games. I thought I'd change my style a little bit. I shaved it off February, 2013 and start growing it back in March. I decided to give the @big boss look for 2013 [laughter].

Zylstra: Any big changes in 2013?
Dadz: My biggest transition was getting back with a coach.  For seven years I was self-coached. I would ask strangers exercising in the area to record me with my phone. Then I would go home, study the day's videos, come back the next day and try to correct my technique. I used to write my own workouts and lifting. Now I don't have to do all that. I can focus on the performance and leave the rest for my coach, Rob Gire. He also coach at la tech university. We have a great relationship. He been doing some amazing things with me. My lifts and throws and technique have improved bounds.

Zylstra: How did your throwing go?
Dadz: As far as being in the ring, 2013 was fairly good; I was pleased with it. I went 65,96m (216' 5"), the 12th best throw in the world and was consistently over 64m. My biggest stressor was I didn't receive my travel documents in time to go home for Jamaican Championships; they arrived after to me after the World's Trials. I am the only one who throw the qualifying standard but not compete in Moscow. But as always; it's all good, I'm past that.

Zylstra: Training in the south allows to to be outside year around. What has training been like?
Dadz: I train eight times per week. I throw four times and lift four times. Coach Gire added throwing heavy implements to my training schedule two months ago. We don't throw any light implements. For years I just threw competition weight 2k.

Zylstra: What's next?
Dadz: I can finally say 2014 and beyond is going to be special for me. Now I feel like a professional discus thrower. I work a full time job with young people and I continue train in Ruston at my alma mater Louisiana Tech. I'm hoping for consistent success in the ring and I am definitely planning on going to Commonwealth Games to match throws with the Aussies, Indians and Brits. That should be a great time.