Two days of a sold-out Olympic stadium London made for a tune-up of grand proportions coming a mere fourteen sleeps out from the track & field world descending on Moskva. 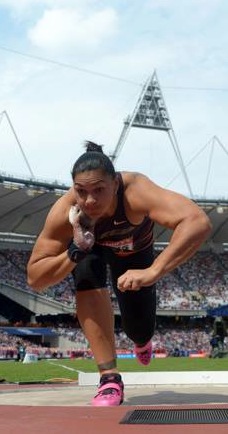 Setting a tone a touch more dominate then some of use were hoping for; all-time fan favorite Val Adams took a quick Eurostar trip through the Chunnel to knock some Germans and Americans around for her 38th straight topper. With recent 20m throwers languishing the 19s Adams’ world leading 20.90m (68' 7") was well clear of the field and took a peak at her personal best of 21.24m (69' 8¼"). Adams' showed her fitness with a useful series of 20.71m, 20.79m, 20.82m, 20.31m, 20.90m and 20.40m. If someone can push out to 20.50m+ in the Luzhniki Stadium we'll see the wondrous New Zealander leave the 70' line behind on her way to 21.50m. Throws coach Jeff “Javeland” Groski suggested, ”Maybe one meet you throw left handed and backwards so the others can be within a couple metres of you?”

German Christina Schwanitz came in second place with 19.74m and American Michelle Carter third with 19.24m. Recently tattooed American Tia Brooks made her 1st appearance across the pond with a disappointing 17.68m (58' 0¼"); well under her personal best of 19.22m (63' 0¾"). Hopefully a couple more meets in the Old World will give her the chops she needs to make the final-12 at the World Championships.

"I'm pretty happy with that. I had great consistency throughout the whole competition. It was awesome," Adams told Fairfax Media from London. "I'm especially pleased with the progression I've made over the last few weeks. In training, Jean-Pierre [coach] and I are heading where we need to go. I'm happy, he's happy, it's all good.

Adams‘ gun may have a touch more spark in the chamber from lingering “pissed off–ness” stirred-up by an earlier press junket at a hotel near London's Tower Bridge. In it some sing-songy reporters were wondering if the shot put queen had softer her feelings toward repeated drug cheat Belarusian Nadzeya Ostapchuk. "I was really, really angry at the time towards her, I was quite sad and depressed and lots of emotions went through me but one thing that remains is that I will never forgive her," leaving no doubt as to the Kiwi’s state of mind. Throwholics wonders the intensity and direction of the fireworks when and if Ostapchuk returns from her measly one-year ban.  If you’re wondering what chances the “B” squad has in catching Adams asleep at the wheel–the Kiwi’s plan? “Home sweet home, Food-Shower-Sleep for the next 2 weeks of great training and preparation for Moscow. The next two weeks are crucial.” Sadly, Prince George couldn't make it for the festivities; he was busy crapping his pants at Buckingham palace.

As usual, the same IOC old guard who kept things amateur to guarantee the Olympic medals stayed among the wealthy back in the day continue to line their pockets 1st by denying the Londoners any use of anything Olympic for their anniversary meet.  How do we grow a sport and celebrate it’s highest levels when the executives are the first to the trough?