This review will be text-based along with a video of the javelin in action.
I will also be adding opinions of not only myself but of various throwers and gathering their feedback writing about the overall opinion of the javelin., Please remember when reading this, that this is all opinion based.

Introducing Gill’s Carbon 1 Countervail OTE Tailwind 100m
Gill Athletics in partnership with Countervail to create the world's most technologically advanced javelin. The OTE Carbon 1 Countervail provides up to a 40% quicker damping rate which results in longer flights with minimal vibration.
The Carbon-1 is designed after the world-record-setting OTE Legend Tailwind javelin and rooted in a patented design by the inventor of modern javelins, Dick Held. Featuring a flex of 4.4 (800g) and a Flex 5.4 (600g) with a thicker grip cord for more support and control, this javelin will behave similar to old-rules javelins and appear to "float" when thrown clean.

First impressions & Visual Design
My opinion, the Carbon1's design when first taking it out of the transport tube, was that it is a very smart and “cool” looking, you get a sort of “ready for action” vibe when first seeing the paint job, with its light grey and white coat, along with the bright orange tail that clearly stands out when you first uncover it.
Of all the javelins I have seen, the Carbon1 is definitely in my personal top 3 when it comes to the visual color designs, the only other javelins to match the amazing paint job and color designs would be the following: (no particular order)

With the Carbon, you feel more drawn to the design not only because of the colors but with the pattern and presentation of the javelin. It moves away from the typical Twirl style “lollipop” design that you tend to see in other javelins and presents itself as simple, clean, and no-nonsense javelin, well presented and ready for action design.
The Overall sense from multiple people I asked about the overall pattern and color design, was that it was by far, one of the best designs and the colors work very well together. A few people went on to mention they thought the orange tail should be a different color and that the light grey should be a shiny grey.

Technical Design
Moving more in-depth with the overall design of the javelin, the Carbon1 one has a thicker grip than the previous OTE javelins and is definitely a stiffer javelin. It comes with a flex rating of 4.4 and is the 2nd stiffest javelin I've known of, but that is not at all a problem, because the carbon 1 does not stop there, the tip of the javelin is more blunted, commonly known as “cigar” tipped, and also thicker, allowing when hit through the point the Carbon 1 will float during flight and land at a new personal best, but the Carbon 1 is not only suited for “powerful throwers”, it is designed in such a way that even athletes that have a lower output of power, can still perform well if hit through the point.

Please do not think that the carbon1 will guarantee you a personal best straight away, you will still need to have the technical ability and be able to withstand the stiffness of the javelin. This applies with most higher class javelins on the market. The Carbon 1 countervail has an astonishing 40% quicker damp rate, this will allow for longer flight and minimal vibration.

The carbon1 was designed after the world record-setting OTE Tailwind. The javelin that the legend Jan Zelezny launched back in 1996 to break the still standing men's javelin world record.

Flight and actually seeing the javelin in action.
I spent a few hours one afternoon with other javelin throwers to test the javelin to see if it could do what they claim it can.

After a few simple throws with hardly any power, it was clear, yes it could. After throwing for a while and then discussing the carbon1 we both agreed that you can hardly feel anything from the carbon, yet the carbon1 is rated 4.4 Flex. a very still implement. Yes, you hardly felt anything, even when you didn't always hit through the point the carbon would handle very well. Talking about the grip it was also agreed that the implement has the best grip.

The flight on the carbon has that is every so balanced and testing the Carbon1’s flight, I had Ben (Pictured) throw the javelin with 40% effort and then with 90% effort along with 2 other OTE javelin, a 90m, and a 70m, and the results were amazing to see, the carbon would float and glide. 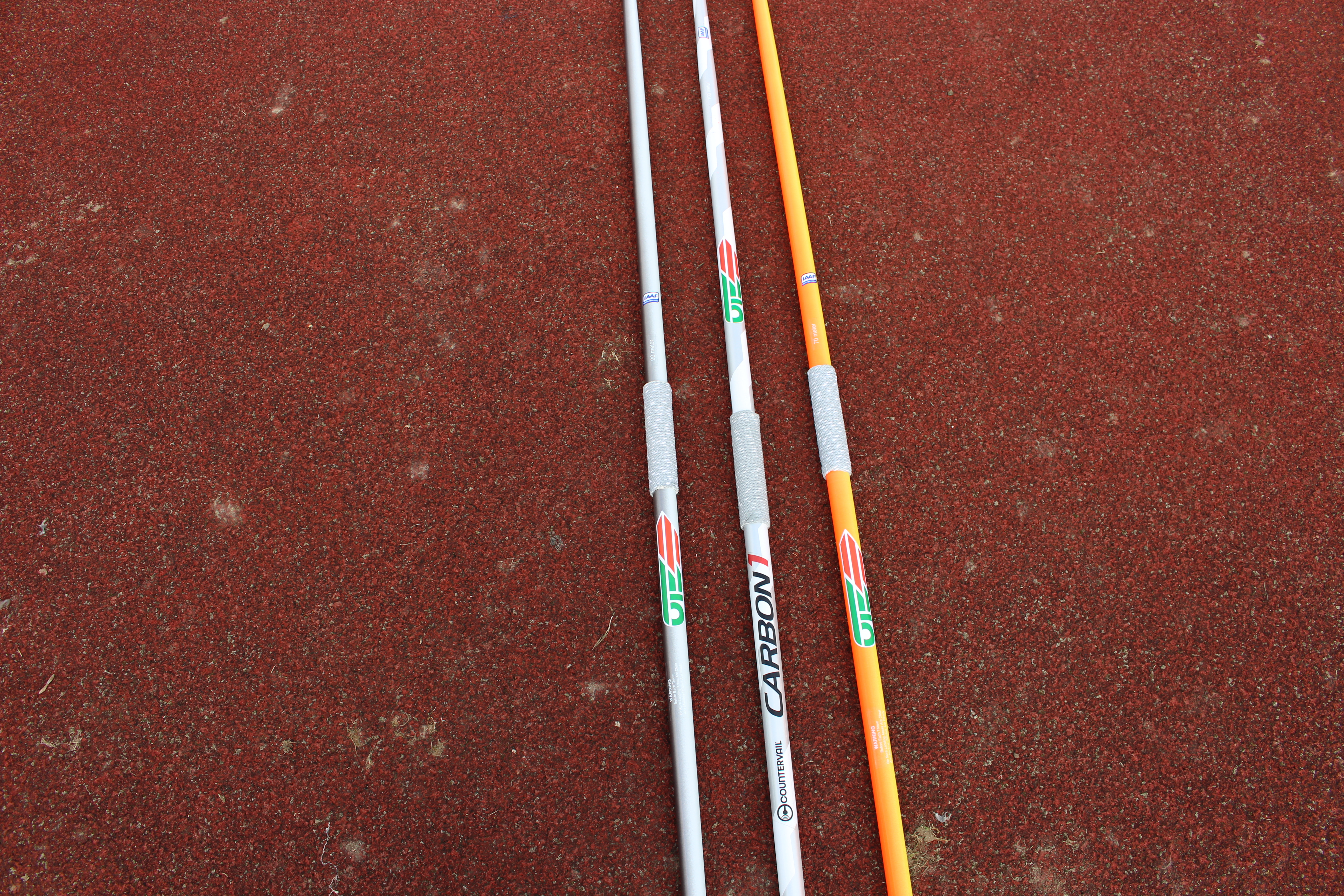 The Carbon1 would give off hardly any vibration (Slight Quiver) along with holding its own during flight and would float on for longer distances.

Overall The Carbon1 is a very good, well-designed javelin and does offer to you a price of $1100 (£837) the javelin could be considered a little expensive but you need to remember what you are getting, a javelin with a 40% Damp rate, allowing it to float more with less vibration, and that the Carbon1 is not just for powerful throwers but also is catered for throwers that generate less power during the throw. The carbon comes in both 800g and 600g weights, but I am sure in the future they may move into the 500g and 700g weights.

If I was to rate out of 10, the Carbon1 Countervail OTE Tailwind javelin would be a 9/10. It’s a very strong contender at challenging competitions.

Ending
Thank you to Gill Athletic for allowing me to test the Carbon1 Countervail OTE Tailwind. It was my pleasure to review this amazing Javelin and hopefully, more reviews will follow.
A video will be uploaded after my review on my Throwshub youtube channel. located CLICK ME

Thank you to all involved in this review.

Thank you again for taking the time to check out my review on the Carbon 1 OTE Javelin.