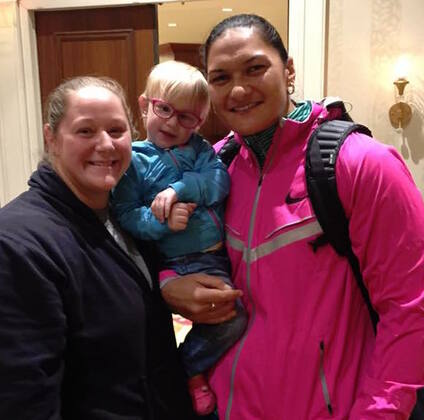 Three world class girls getting ready for some shot putting[/caption]


Zylstra: Looking at 2016, what do you need to work on, improve?
Camarena-Williams: Right now I'm working on consistency and getting my technique back to where it was in 2012. I had a few injuries that have held me back a little from hitting the positions I used to, I just started getting this back right before I left for USA Indoor Champs. As a rotator, I think very linear about the throw. That is how I learned and I am trying to get back to that approach.

Zylstra: What are you doing differently to prepare for the Olympic Trials and Olympic Games?
Camarena-Williams: My life is so full right now of obligations of being a parent, so my goals right now are to really focus when I am at practice and try not to think about if the other things in life. I'm coming to the end of my career and with a new coach my training is a little different than before, but I’m trying to stay true to the things I know work for me. My coach has been awesome in adapting to my technique and training an “older” athlete. I cannot do as much as I could when I was young so I'm doing more rest and active recovery than before.

Zylstra: Where will you be living and training until the Trials?
Camarena-Williams: I live, train and work in Tucson, Arizona [USA].

Who are you training with?
Camarena-Williams: Since I’m an assistant coach at the University of Arizona I’m lucky enough to train with their talented group (U23). I also am training with Canadian Olympian Julie Labonte. I am being coached this year by the new Arizona throws coach TJ Crater. I throw 3-4 times a week and unless they are traveling for a meet I will see coach Crater every time I throw. My active recovery days are done in the Arizona weight room so I do not usually see him; but I will check in with him if I have any changes to my workout plan depending on how my body feels.

Zylstra: Who is on your support team?
Camarena-Williams: I have a great support team. Everyone at the University of Arizona athletic department has been so amazing to let me train at their facility. My husband is an athletic trainer for the Arizona track and field team and so he is also my athletic trainer, my coach is TJ Crater, the Arizona throws coach, and I have the opportunity to use their amazing facilities.

Zylstra: What stuff do you throw?
Camarena-Williams: Early in the season we do a lot of 4k-10lb med ball work. When it comes to implements I have thrown the 6k/5k in the early part of fall, probably for about 4-5 months, we then moved to a 5k/4k rotation for 2-3 months now we have rotated the 10lb, 4k, and even some 3.5k for speed work.

Zylstra: Do you do plyos, sprints... etc?
Camarena-Williams: I love plyos and unfortunately due to some injuries early on had to shy away from them, but I do everything from box jumps (single- and double-leg) to bounding, sprints, med ball plyos and upper body plyos, and ladders. What weight lifting exercises will you do? I'm lifting 3 times a week which will include 1-2 olympic lifts, either a clean, hang clean, or speed snatches. I do squat, but occasionally this is replaced due to my two previous back surgeries. After that it is onto med ball plyos, auxiliary lifts, and core.

Zylstra: When do you plan to begin competing outdoors?
Camarena-Williams: As of now my first competition will either be Mt. Sac or Drake relays. It will depend on how I come back from competing in such a long indoor season.

Zylstra: What do you keep in your duffel bag?
Camarena-Williams: My duffle bag contains lots of tape in many different sizes. I do not use wrist wraps, always have liked the tape. I have a soft ball for rolling out, a mini cone that says “superstar” on it for marking during practice, my shoes, back brace, gum, headphones, and lots of water for the Arizona heat.

Zylstra: How does nutrition fit in with your training?
Camarena-Williams: Nutrition is a component I work on every day. It truly is a component that young athletes really need to work on, and as an older athlete I have seen how it can positively and negatively affect my training. I have worked with Alicia Kending of the USOC out of the training center and I used Advocare for my supplemental needs. Advocare has a safe sport stamp and has truly helped me as I have been training. Their products give me the energy I need when I don’t feel I have any to give. Who do you see as the medal favorites mens and womens shot put? I feel there are a lot of medal contenders in each of the events, it is hard to narrow it down to just a few. What do you do to relax? I love family time for my relaxation. Even though my little girl has so much energy and it may not actually be called relaxing, just being around her and my husband makes me relax and enjoy life so much more. They are my rock, so anything I can do with them is awesome. Vacation(s) planned? We have a vacation planned for next Christmas time. We are hoping to go to Hawaii!

Zylstra: How does your family affect your training?
Camarena-Williams: Dustin recently took Miley for about 24 hours. When I met up with them in Washington he said, “Now I see why you are so tired all the time, Miley has so much energy!!” And she truly does. I think before when I trained I could nap or relax however and whenever I wanted, now I am on Miley time. If I want to sit down and relax and she wants to go outside and play, that is what we do. But truthfully, it is amazing, it reminds me that there is life after track and field, and it is a wonderful life!

Zylstra: How do you want to cap off your career?
Camarena-Williams: I hope to end my career as an Olympic medalist. I know there are a lot of girls out there throwing well, and I have been to that level. My new mantra is a Toby Keith song: “I'm as good once as I ever was,” and I think of that every day I train. I may not be exactly as conditioned as I was in 2011 and 2012 when I was throwing 20 meters, but I have the experience and talent to be as good once as I ever was!