Robert Urbanek (29 April 1987) is a Polish Olympic discus thrower. His personal best is 66,93m (219′ 7″), thrown in 2012 in Halle Germany. Along with taking home bronze from the Moscow World Championship last summer, fan favorite Urbanek also has a European Championships bronze medal and placed 6th at the 2013 World Championships in Moscow.

Zylstra: What size do you plan to maintain this season?
Urbanek: I am 200cm tall and my current weight is 121kg. When the competitive season begins I want to be at 125 kg. I plan to be at about 123-125 kg at the Olympics.

Zylstra: What are you doing differently to prepare for the Olympics?
Urbanek: Well, more or less the same stuff I did in my last year. However, I want to focus more on the Olympic Games and therefore compete less during the season.

Zylstra: What do you need to do to be named to Poland's Olympic Team?
Urbanek: We need to reach 66m in a high-class competition and compete well during the National Championships.

Zylstra: Where will you be training?
Urbanek: We stayed in Poland until the end of January mainly in the Spała Olympic Centre. From February until April we will have three training camps: two in Portugal and one in the US or South Africa. 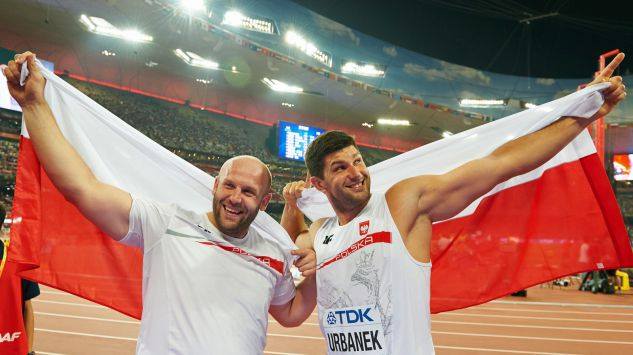 Zylstra: Who are you training with?
Urbanek: Piotr Małachowski and I train with coach Witold Suski on a daily basis.

Zylstra: Is throwing part of your off-season training?
Urbanek: Yes. Starting in December we've been throwing 4-5 times per week with the discus (2kg-2,5kg), 2,3kg bars and 2,5kg shots with a discus technique.

Zylstra: What do you do in the weight room?
Urbanek: Snatch, squat, snatch pulls, bench press, incline bench and other various standard exercises using machines and bars.

Zylstra: Are you going to try anything new this off-season?
Urbanek: Besides making some changes in the intensity of the training and the main focus on technique, I guess I will not change much. I need to improve technically and the rest is going in a pretty good direction. Of course I need to avoid injuries to be healthy throughout the season.

Zylstra: When do you plan to begin competing?
Urbanek: Probably my first competition this year will be the Diamond League meeting in Doha.

Zylstra: Who do you see as the medal favorites in Rio?
Urbanek: There is the current World Champion Piotr Małachowski consistently presenting a high level of discus throwing. [Robert] Harting is coming back from injury and he will be strong this year. Milanov is on the right track to become a new champion in discus, young and explosive. There is of course me and a number of guys pressing hard like Christoph Harting, Martin Wierig, and the Jamaican [Fedrick] Dacres. It will probably be the last Olympics for [Gerd] Kanter so he will also try to snatch an Olympic medal. The only certainty is that this season is going to be a very interesting season with some surprises.

Zylstra: What will you do to relax?
Urbanek: [laughter] Right now I am thinking about training really hard, I will think about a vacation after the Olympic Games.