My post meet reflection on the 2015 Beijing World Championships.

I had a decent hurdle race to start off the heptathlon, running a 13.59, a tenth off what I ran at USA Nationals. I was really hoping for a [personal best] since I felt great in practice and was running fast. However I knew there were six more events I had left where I could improve and put together a big score... 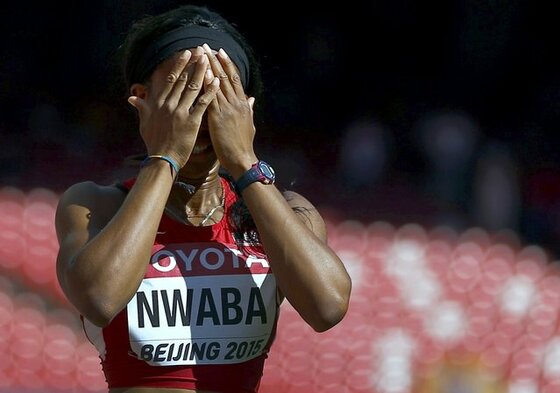 Unfortunately this is all a tall tale. I would have been ecstatic if things had actually went this way. The truth is I take seven steps to the first hurdle but on the opening day of Worlds I let myself take eight steps instead, jumping off the wrong leg. I tried to recover in between hurdle one and two but I was too bunched. I hit hurdle two with my lead leg and went down, smacked the track hard and rolled into lane two. I could not believe this was happening to me. Before I could even think I got back up, ran over hurdle three and four, and hit hurdle five. Down I went again and this time all I could do was stare down the track in complete shock of what had just happened. My hopes of a podium finish were over. To put things in perspective when I ran 13.49 at USAs it was worth 1052 points. 25 seconds would have given me a whopping 4 points. Somehow they clocked me finishing at 59 seconds. Only I didn’t finish the race and nor did it matter. I walked off the track in disbelief. Pain on my face, tear stricken, and feeling immensely disappointed I wanted to be anywhere but inside the Bird’s Nest.

Luckily for me I have an awesome group of people in my corner. The support I received from my coach, family and friends really helped me get through the next six events. And not only get through it but really enjoy my time out there like I should. When my coach said, “Now let’s make it your goal to feel comfortable out there because you never quite looked yourself,” and my mother said, “Dry your eyes, don’t worry. You walked away with no injuries." 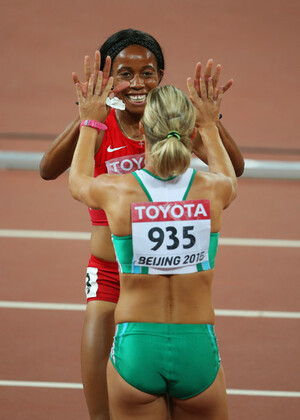 It really put into perspective just how awesome of an opportunity I was in and that I could not let it go to waste. I was officially getting ready for Rio 2016 and what better environment could I ask for?

In the afternoon session I went on to [throw a personal best] in shot on my second attempt, with a throw of 14,64m (48' 0½"). YES! That comfortable feeling that I’ve been looking for in the ring was finally starting to set in. I think in that moment I was truly starting to have fun. Despite the circumstances, I had a smile on my face.

The second day didn’t seem to begin any smoother than the first. In the opening event, long jump, I fouled my first two attempts. Even though I had nothing on the line I would have still been upset with my performance. Staring down the runway is something that cannot be matched in any type of practice environment. On my final attempt I jumped 6,08m (19' 11½"), the third longest jump of my career. Heading into javelin I was riding a wave of confidence.

With two events left in competition, this is usually around the time when daunting thoughts of the 800m creep in. And if you're not a seasoned heptathlete that can usually distract you from the task in front of you. But with all that energy built up from the long jump I was looking for even better things to happen. From the way practices were going leading up to competition I knew I had a big javelin throw on the horizon. I remember turning to Bri (Brianne Theison-Eaton) saying “I’m doing okay. If I can leave here with new [personal bests] in the next two events I’ll be happy.”

So, we weren’t allowed to pick down the field (Picking is a warmup we do in javelin. We take short throws down the sector as a group), and choosing the right javelin for me was a little bit of a struggle, but at this point I learned it's best to just go with the flow. The lesson of playing the hand you've been dealt was clear. Although I was focused on killing it, my confidence wavered a bit after my first throw of about 38m [39,29m (128' 11")]. I knew I could do better and on the second attempt I let one fly. Honestly the release of the javelin didn’t feel great. I watched it cut through the air, slightly missing the point, but then to my surprise it lined up. It measured 46,59m (152' 10"), another personal best! 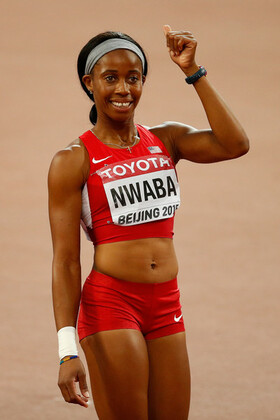 The feeling I got from doing well in those events was absolutely amazing and just goes to show that you can make the most out of any situation. I could have convinced myself after event one to pack up my things and try again next time, and that I think would have been harder on my conscience. I crossed the finish line of the 800m, first in my heat, with my head held high. No, it wasn’t a PR (I was disappointed by this) and in no way would setting a goal of running the fastest time in the field be expected of someone who finished in 27th place. Yet I ran that race like I was in heat four with the top nine, knowing I should have been there. I gave it all I had left and I can look back now and appreciate how much I have learned about myself and what it takes to excel at the highest level of my sport.

This season has been amazing! From being invited to compete at the world famous Gotzis Hypomeeting, to winning USATF Nationals and making my first Worlds team, I cannot complain. I’m so grateful to God for the talent and opportunity He has blessed me with. This journey would be nothing without the experiences that challenge me mentally and physically. Next year's possibilities are endless' As far as I’m concerned, what happened to me in the hurdles will only be used as fuel when I get back to training. I’ll be getting ready for the biggest stage in my career, but I hope whatever fear I have will be turned into faith and confidence. Thanks to all who have supported me and continue to do so! I pray that next year at this time I’ll have a chance to reflect on an awesome and unbelievable 2016 season!
-Barbara Nwaba

Throwholics note: Barbara was the only heptathlete to set personal bests in both throwing events.